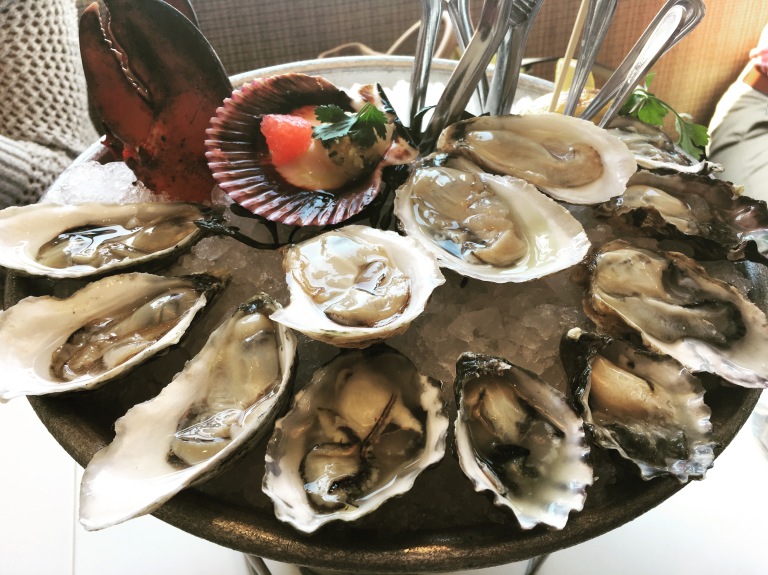 Raw Oysters (and a peruvain scallop) from Fishing with Dynamite in Manhattan Beach, CA (http://www.eatfwd.com/)

One popular pastime among many is going to a happy hour on a sunny afternoon with friends and ordering a dozen raw oysters to share. The waiter comes with the iced plate of raw oysters on the half shell, just shucked a few minutes ago – the plate is complemented by a few lemon slices and a trio of sauces, horseradish, cocktail, and mignonette sauce. You might order a cocktail, or two, to wash down the briny, savory oysters. While some today may find eating oysters, raw or not,  unappetizing due to the flesh’s unusual appearance and its briny, slimy taste, oysters were part of the standard diet for thousands of years.

Interestingly enough, unlike most foods that have increased in consumption over time (such as beef or pork), the consumption of oysters decreased over time – the normal individual today eats fewer oysters than he would have a few centuries ago. Unbeknownst to many, oysters were a staple food for many civilizations such as the Romans, native Americans, and even New Yorkers back in the 1800s.

We’ll begin with the history and origins of oysters (which date back to the time of dinosaurs), and then their role as a staple food during the hundreds of thousands of years that humans have walked the earth. After that, I’ll go into the oyster and its importance during Greek and Roman history all the way to modern times. The oyster’s position in the human diet has fluctuated over its history of existence between being a staple food of the working class to a delicacy of the wealthy due to many reasons.

Oysters and their relatives such as scallops, mussels, clams are known as bivalves since their shells are made up of two parts called valves. Bivalves are one of the oldest Earth’s existences and have existed for over 500 million years, in a period known as the Cambrian Period. While the fossil records show that bivalves have not evolved very much as the fossils resemble the modern day oysters, clams, mussels, and other shellfishes, they were noticeably bigger back then. In fact, these fossilized oysters evidence that ancient oysters were as long as 3 feet and weighed more than 20 pounds. That would have made for a very tasty appetizer.

Oysters were originally cooked by fire as early humans had primitive tools that would have made it difficult to open oysters to eat raw. Archeologists believe that oysters were placed over fire or heated stones and cooked until the oysters opened up as oysters from the Mesolithic period show evidence of scorch marks from fire. The use of fire by early humans evidence back to about four hundred thousand years ago, so consumption of oysters most likely began after that time.

The Stone Age, which was between 2.5 million years ago to 9600 BCE, left behind fossilized oyster shells from many coastal civilizations, which demonstrated that oysters were an important part of the human diet for thousands of years. As oysters grow in shallow waters and could be easily picked up, it was easier to collect oysters and shellfish than to hunt for meat. Furthermore, oysters stay in one location their entire lives and do not move once they attach themselves to a surface, so it was even easier to gather. Over a decade ago, archaeologists exploring a cave in South Africa uncovered evidence of shellfish dinners enjoyed by humans from 164,000 years ago. This demonstrates how early of a role oysters played in early society and survival.

The Greeks and Romans’ love for oysters

Oysters were a delicacy for the wealthy class during the Greek (13th-9th BCE)  and Roman empires (8th BCE-5th AD). Oysters were so important to the Greeks that the Greek became the first to cultivate oysters. This was done by fishermen who would scatter broken pottery pieces where oysters grew to get the oyster babies to attach. The pottery pieces would then be collected and transplanted. Oysters were so important, that the shell of oysters were even used to cast ballots in the voting process. Besides voting, the Greek myths show how important oysters were – the Greek God, Aphrodite, Goddess of Beauty And Love, was born from the sea form in an oyster. Hence, the idea that the oyster is an aphrodisiac came from Aphrodite.

After the fall of the Greek empire to the Romans, oysters continued to play the same important role. Oysters were still a part of the rich’s extravagant dinners as in Roman mythology as Venus was the Roman counterpart to the Greek God Aphrodite. As if a foreshadow to the modern day’s depletion of oyster beds, oysters became scarce due to overharvesting during the Roman empire. The Romans ended up transporting them from their conquered territories where oysters were plentiful, but the shortage of oysters persisted as oysters were highly perishable during transportation. The shortage fueled even more cultivation efforts, and these rudimentary methods gave way to modern methods that are used today.

After the fall of the Roman empire and to the Renaissance (5th to 15th century), a lot of the history was not recorded or were falsified, or destroyed, hence the “Dark Ages”. Note that Christian crusaders who invaded Constantinople burned libraries of valuable works, and along with it keys to the details of life during the Dark Ages. It is very possible that oysters probably continued to be a delicacy in Europe as it did during the Greek and Roman empire.

During the Renaissance, oysters were just as popular with the wealthy. The depletion of oysters and the overharvesting were not apparent to the consuming upper class. However, it was for the working class who gathered these oysters as they had to work longer hours to harvest oysters; however, the difficulty in harvesting oysters contributed to new techniques in harvesting oysters at greater lengths and using tide knowledge to be more efficient in harvesting.

The Golden Age of Oysters

The period between the 18th to the 19th century was known as the Golden Age of Oysters as the surge in oyster production made it extremely affordable for the working class in the US and in Europe. Because oysters were harvested at an unscaled level and became extremely cheap as a result, oysters quickly became very popular on the dining tables of all classes.

In the early 1800s, oysters were still only eaten by the wealthy; however, the surge in production by the mid-1800s meant consumer prices for oysters dropped substantially. With the surge in production, oysters became cheaper to purchase than meat, poultry, and fish. In 1885, oysters cost $0.03 each (equivalent to $0.73 today) and dropped to $0.01 (equivalent to $0.25 today) each by 1889. The low prices meant anyone could eat them, and oysters quickly became popular with the working class as it was a rich, cheap source of protein with major oyster markets such as New York City, Philadelphia, Baltimore, and New Orleans supplying the high demand for oysters in the US and coastal cities within the United Kingdom such as the Whitstable and Colchester supplying the demand in London.

New York City served as one of the largest oyster production starting in the 18th century, so oysters influenced early New York City history and its restaurant industry as well. In fact, oysters were such a key part of New York City’s economy that its shells were used for roads, cement, fertilizer, and many other items. It was very similar in Europe, especially in the United Kingdom, as English cities such as Whitstable, which served the Romans as oyster markets, even has an annual Oyster festival to this day.

The invention of railroad transportation in the 19th century meant that oysters were shipped all over Europe and the US. Besides railroad transportation, canning and refrigeration were two groundbreaking developments that also gave rise to the trade of oysters and meant oysters could be shipped everywhere and kept fresh for a longer period of time.

In both the US and Europe, oysters became a standard part of the diet due to its abundance, accessibility, and low cost. Oysters were eaten raw or cooked, and also used in pies, stews, or cooked with other meats. In London, oysters were sold at every street corner during the 19th century. This was very similar to the development occurring in New York City as it was common for New York City street vendors to sell oysters as well. The oyster street vendors could be thought of as the modern hot dog stands in New York City today. Oysters were also very popular with bars as well since they were seen as a cheap food to serve alongside liquor and beer.

By the 20th century, the overharvesting of oysters in the US and Europe was noticeable and it was difficult to maintain the oyster stock needed to meet demand. In the US, it was further exacerbated as major oyster markets in New York and New Jersey shut down its oyster beds due to overharvesting. The harvesting moved over to the Chesapeake Bay and other areas, only to be eventually shut down as well due to overharvesting. Meanwhile, in the 1970s, there were diseases that afflicted the oysters and brought species of oysters to the brink of extinction. Non-native oyster species were introduced to oyster beds in order to encourage the growth of oyster populations.

The consumer demand for oysters stayed high, so many switched to oyster farming and cultivation to produce enough oysters to meet the demand of consumers. According to Monterey Bay Seafood Watch, “Farmed oysters account for 95 percent of the world’s total oyster consumption. Most oyster farming operations are very well managed and produce a sustainable product.” This is indeed the case –  natural oyster beds no longer supply much of the demand as a result of overharvesting, disease, pollution, coastal development, and other factors.

And once again, oysters have become a relatively expensive food item and it quickly lost its position in the working class’s life. Per statistics, it is said that the average American today eats only 3 oysters a year, while New Yorkers in the 1800s ate about 600 oysters a year. In ancient history, oysters were an important source of protein for many civilizations. It became a delicacy during the Greek and Roman times and stayed a delicacy among the wealthy until the mid-1800s when it became affordable for people of all classes. It was quickly embraced by the working class as a staple food only for it to lose its position as a cheap, affordable food item due to overharvesting and other factors.

Today, oysters are still commonly enjoyed by many as it is relatively affordable – though not as cheap as before. People crave oysters for its briny or sweet taste (depending on the region) and enjoy it today in various ways-  raw, steamed, fried, grilled, roasted, or stewed.with other ingredients. For me, I enjoy them raw by the dozen with a squirt of lemon for flavor and a little dash of horseradish sauce.

View all posts by C P