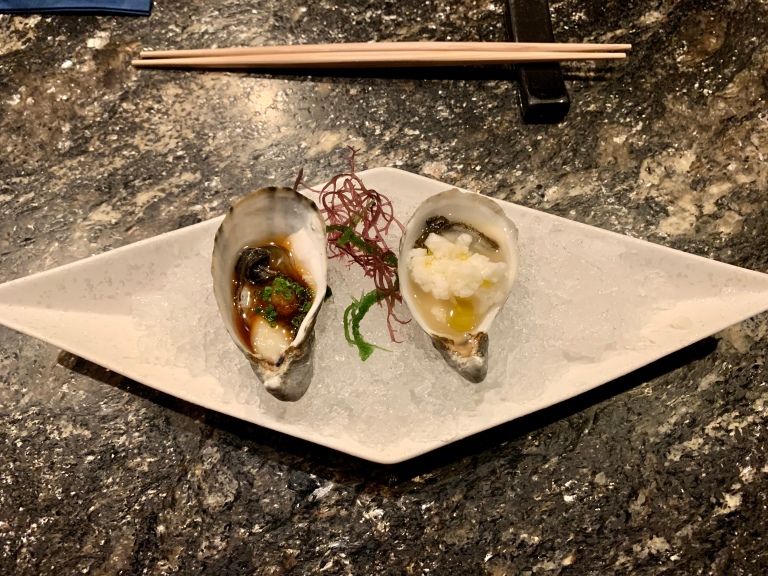 1st course of the omakase – Kumamoto Oysters from Seattle. One with ponzu/green onions and one with momiji oroshi (grated radish with chiles). Photo by Author.

One of the reasons I love Los Angeles is its many different types of neighborhoods and its diverse range of foods – if you want taquitos, you can go to Olvera Street; if you want okonomiyaki, you can go to Little Tokyo; if you want dim sum, you can go to Monterey Park. And the best thing about this is that it is all very good and authentic. While the word authenticity is at times questioned (some people don’t believe food can be authentic if the chef changes a dish up from its traditional ingredients or incorporates different cooking techniques), I believe food can both be authentic and be locally influenced as well – California has so much produce and it would be disappointing if one did not take advantage of this. For example, Yu Bo, a famous Sichuan chef from China known as the “Ferran Adria” of China, is intent on opening a restaurant in LA. He had LA Times publish his mapo tofu recipe, and it included something that typically isn’t found in mapo tofu: avocados. The addition of avocados into this dish demonstrates a fusion between one cuisine and California. Los Angeles is a place where you can find just about any type of cuisine, and guess what? The food is going to be really good.

While sushi has gotten popular in the last few decades in the US, it still is a little different from sushi in Japan. With our American palates that have been conditioned to flavor saltier and sweeter foods, we tend to prefer sushi rolls drenched in some kind of teriyaki sauce or mayo sauce.  However, we do have some of the more traditional and authentic dishes such as nigiri (sashimi on sushi rice). We also have omakase, which is a Japanese phrase that means “I’ll leave it up to you”. Omakase-style means you leave it up to the chef to decide. Omakase also tends to emphasize seasonal ingredients as well. Los Angeles has a good amount of Japanese restaurants that offer omakase – some can be moderately priced or can be on the more expensive side depending on how many dishes there are. If you haven’t tried omakase before, I highly recommend it – omakase is the quintessence of high-quality Japanese cuisine and I’m glad Los Angeles has access to so many great Japanese restaurants.

I went to Sushi Zo, an omakase-only Japanese restaurant at the beginning of November 2019. Sushi Zo only has four locations in the US – 2 in Los Angeles, and 2 in New York. Since Sushi Zo is an omakase-only restaurant, this means it emphasizes on traditions and authenticity; from a business standpoint, it can be risky since if a restaurant is only omakase-only, that means the only stream of revenue is going to be people who can afford $200 meals. The restaurant would also need continuous traffic of individuals who would be willing to spend so much for dinner. Some restaurants will do a mix of omakase and a la carte as this is more financially sustainable. Sushi Zo has been around since 2006 so it means that its dishes must be amazing if it can keep customers coming in.

The founder of Sushi Zo is Keizo Seki who was born in Osaka, Japan. He dreamed of becoming a sushi chef and trained in Tokyo. He moved to Los Angeles in 1991 to continue learning more about the restaurant industry and first opened up Sushi Zo in West Los Angeles in 2006. Soon after he opened the restaurant, he won a Michelin star. Today,  Sushi Zo has additional branches in Bangkok and Hong Kong.

Sushi Zo emphasizes on ittai-kan, which is when neta (seafood) and shari (sushi rice) unite in perfect harmony. There are great sushi places that are moderately priced such as Sushi Gen in Little Tokyo, but the difference is that high-end omakase restaurants serve you sushi one piece at a time – this ensures that it is served when it is at its freshest, just cut and the sushi rice molded just seconds earlier. Omakase only restaurants also an emphasis on the highest quality and freshest ingredients. The rice is also carefully cooked, seasoned with vinegar, and served at body temperature to ensure ittai-kan. 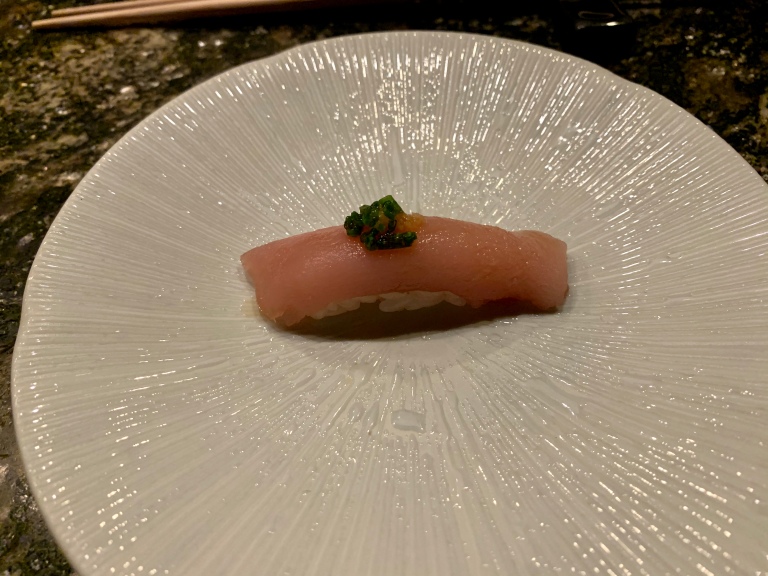 I was excited to try Sushi Zo since I was going to be in Japan for vacation the following week, so I thought it was good timing as I was going to go try an omakase restaurant in Tokyo and compare it to the ones in the US. Last year, I tried Q, a Michelin star-rated restaurant in downtown LA last year. I believe Q is slightly better, but they were both great in their own ways. Service was top-notch in both, but I believe Sushi Zo was a bit better in providing service. Omakase only restaurants tend to be very traditional, which means they can be very rigid in requests (i.e asking for a plate of wasabi, soy sauce, and declining to do anything special for a birthday meal). At Q, I let them know it was for a birthday dinner, but they said they could not do anything as they only had tamago for dessert. At Sushi Zo, when I booked the reservation, I noted it was for a birthday. I was not expecting anything going in, but when I left the restroom, one of the waitstaff asked me if I could write down the name of the individual whose birthday it was. I was surprised as I was not expecting anything. Sushi Zo won the award for good service when they came in with a waffle cake and a scoop of ice cream, candle, and icing spelling out happy birthday.

Overall, it was a great dinner and I’ll definitely want to come back again after I try other omakase-only restaurants in LA.

See below for the photos of the rest of the amazing omakase! 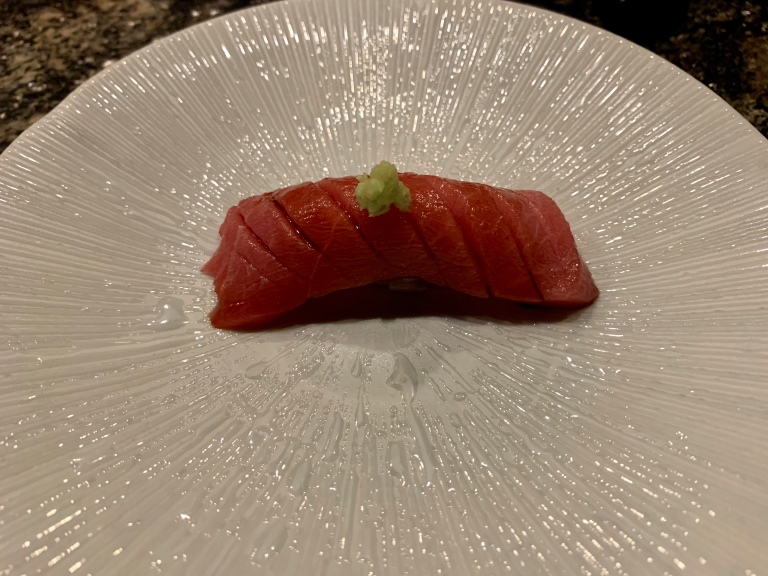 7th: Bluefin Toro aged for a week with soy sauce. Photo by Author. 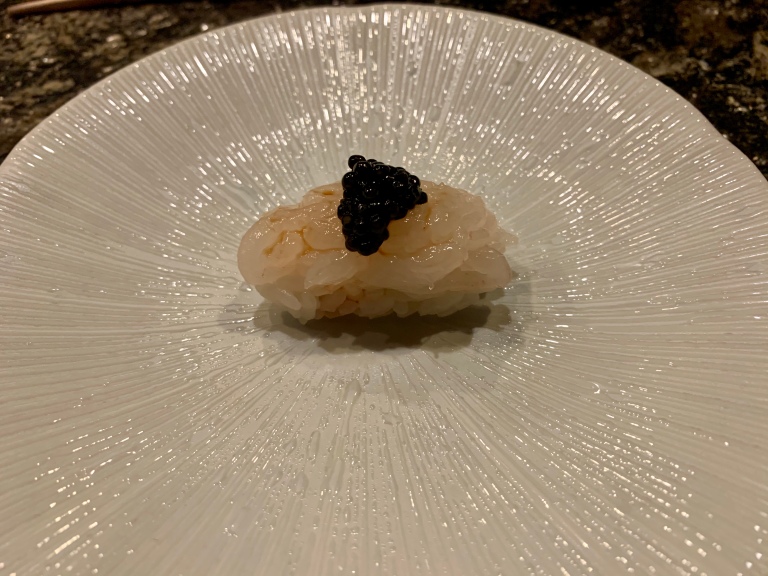 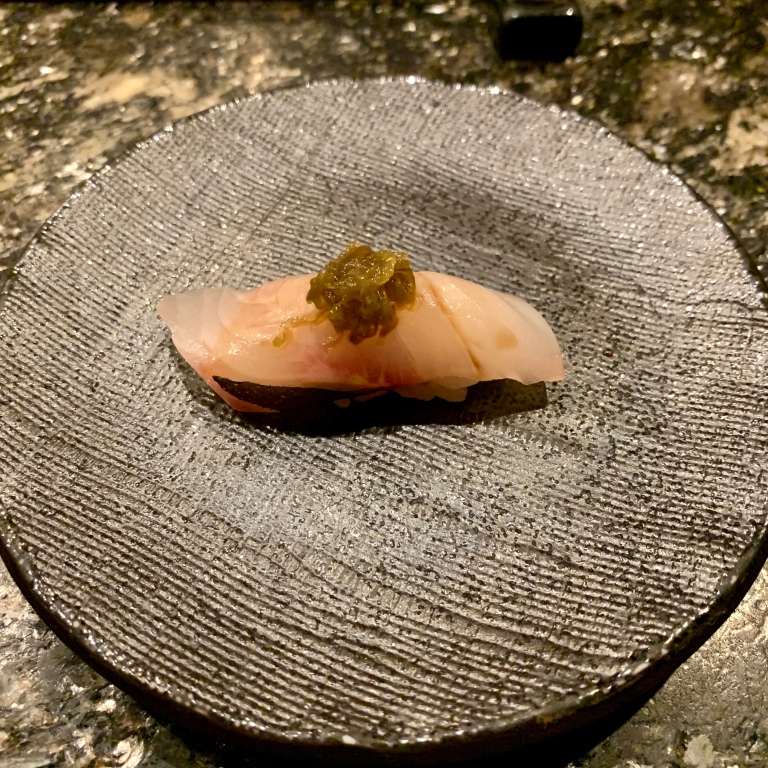 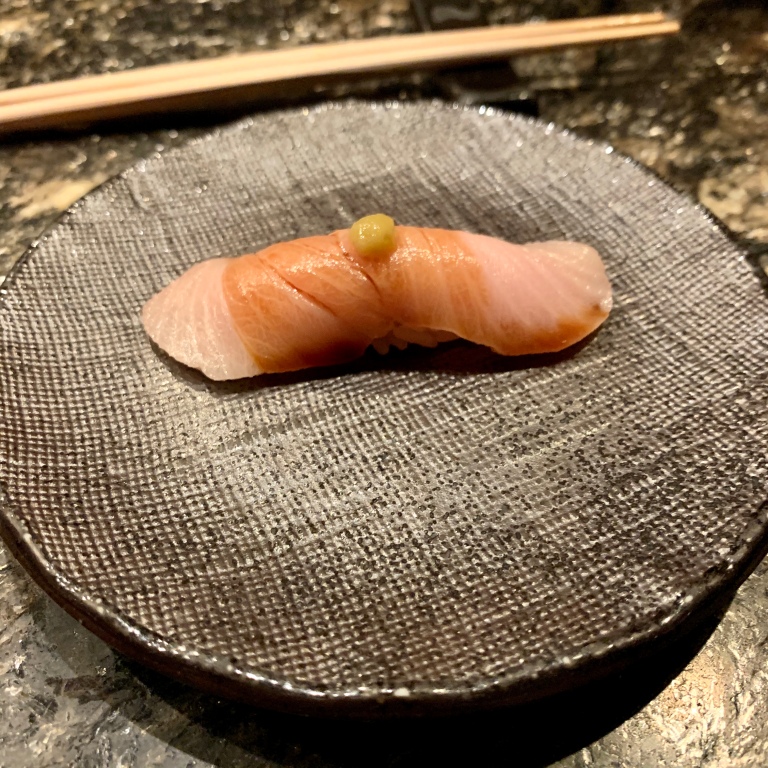 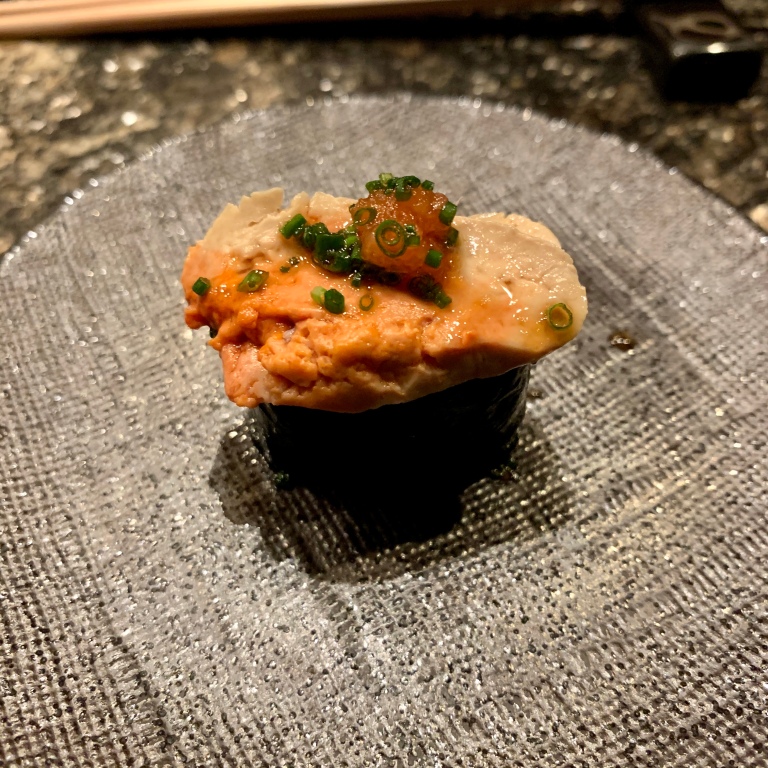 12th: Monkfish from Boston. Steamed and topped with ponzu and green onions. Photo by Author.

13th: Black snapper from Greece smoked with applewood and topped with sea salt. Photo by Author. 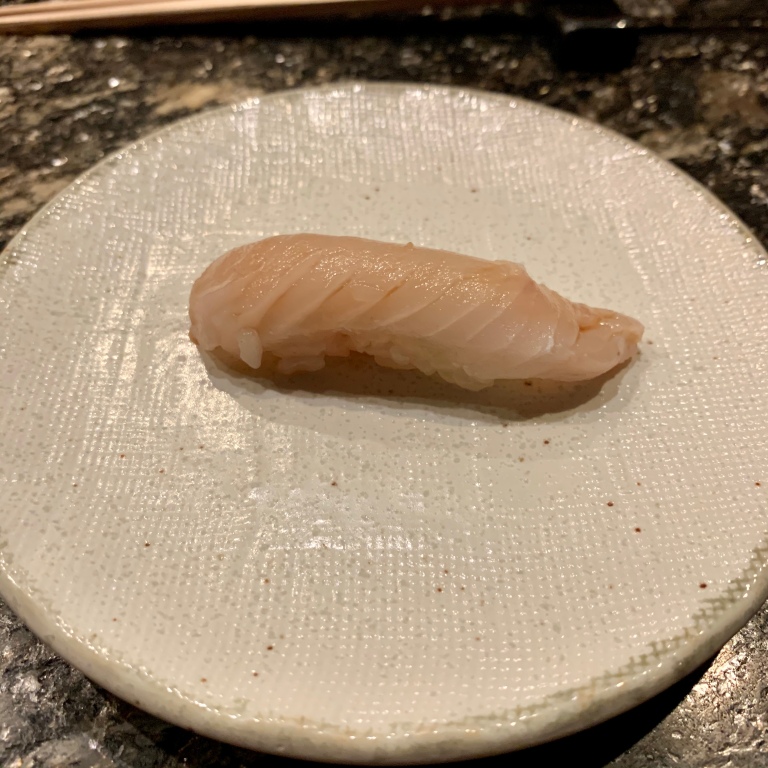 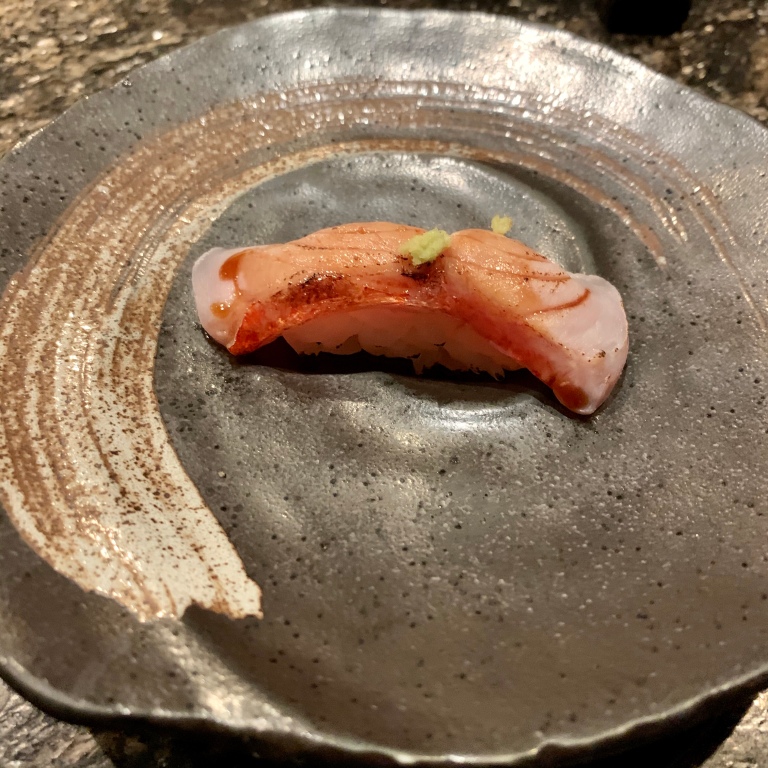 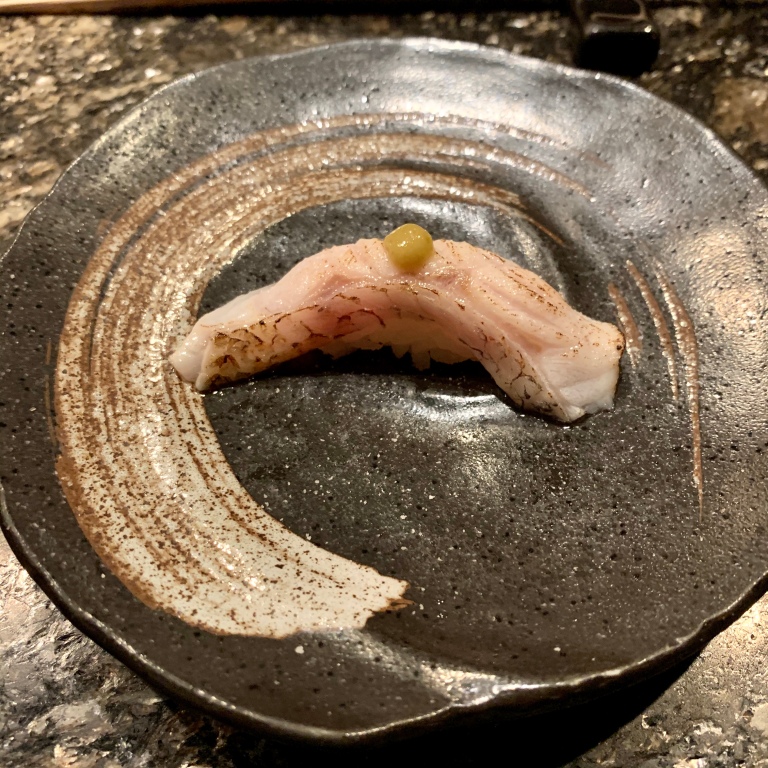 17th: Seared sea perch with yuzu and lemon and salt. Photo by Author. 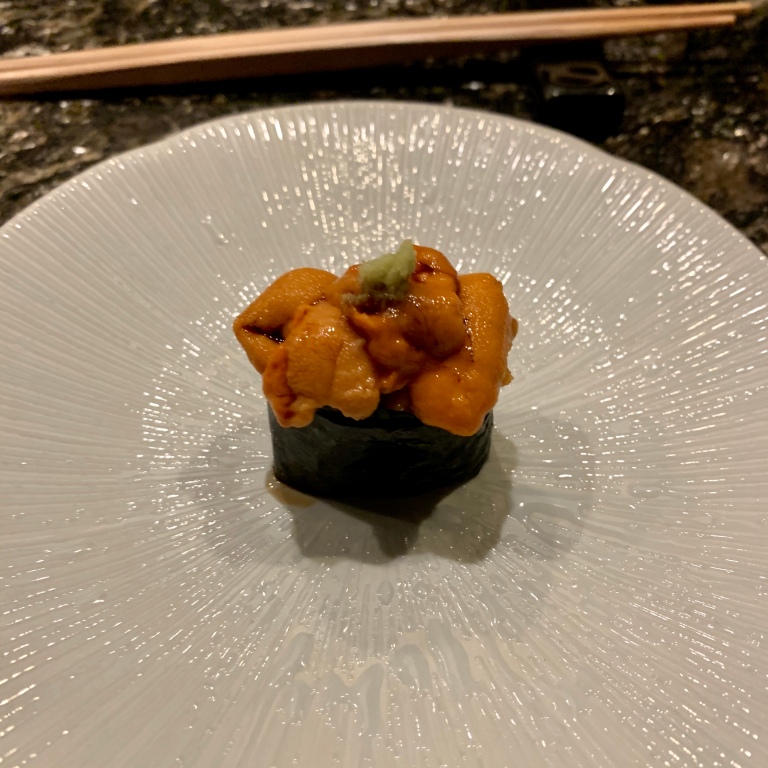 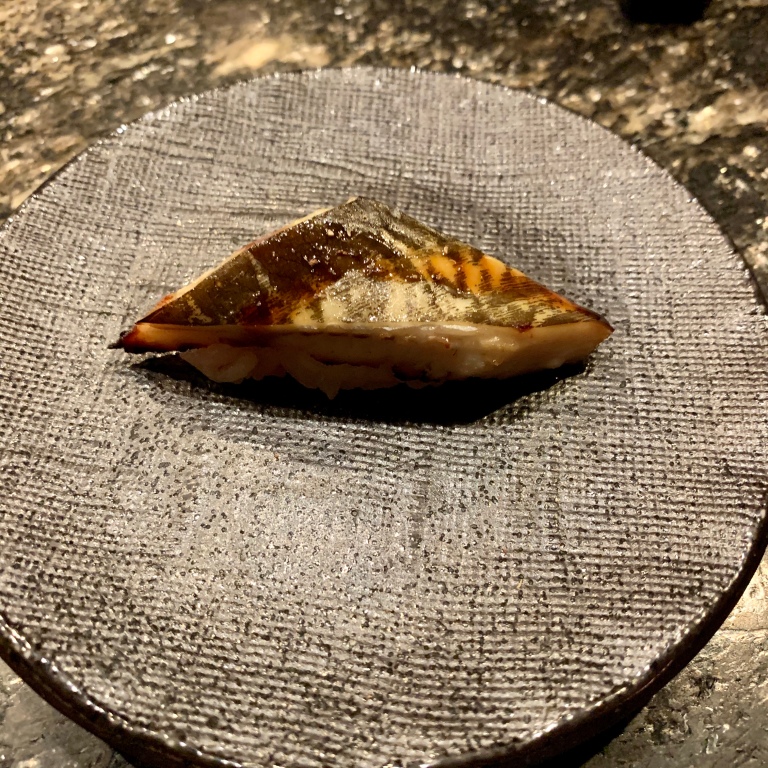 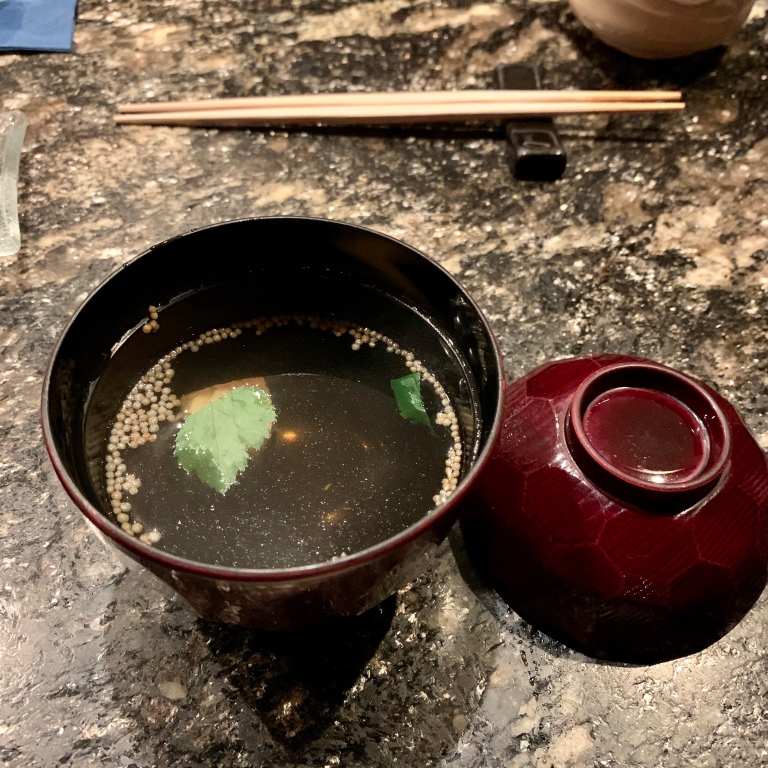 25th: A slice of tamago for dessert! Photo by Author.

View all posts by C P

Cheese makes the world go round! I’ve applied to @whispssnacks to be their CEO (Cheese Executive Officer). May the cheesiest applicant win!
auburn was an amazing restaurant in Hollywood that permanently closed in late April 2020. Its tasting menu featured California’s finest ingredients and showcased Chef Eric Bost and his team’s talent and creativity. In May 2020, auburn was also selected as a James Beard nominee for best restaurant design. auburn will be dearly missed. I wrote about my experience at auburn in my blog to commemorate the restaurant. I also look into how the restaurant industry will be impacted over the next few years.
What's more comforting than a giant pan of paella? Paella originated from Valencia of Eastern Spain. Its current form that we are familiar with has been around since the mid-19th century, but it is believed an early predecessor of paella was eaten as early as the 8th century. The name of the dish comes from paellera, the name of the wide, shallow traditional pan used for cooking the rice dish over an open fire. The main ingredients of paella include short-grain rice, meats, vegetables, and saffron. However, there are many local variations; for example, there is paella de mariscos, which uses seafood instead of meat. Rice was introduced to Spain by the Moors who are of Arab descent. The Moors began rice cultivation in Spain around the eighth century. Valencia, one of the largest natural ports in the Mediterranean, was and still is one of the most important rice-producing areas in Spain. Rice dishes were limited to Valencia but spread to the rest of Spain over time. When it was introduced, paella was eaten by all classes. Many working-class farmers and laborers cooked paella for lunchtime. Their paella was typically made with rice and other available ingredients from the fields and countryside such as tomatoes, onions, and beans. Rabbit or duck may have also been added as well. For special occasions, chicken and saffron were added in. Paella was also used for family gatherings and religious feasts. During that time as well, paella was eaten directly from the pan that it was cooked in. As rice became more common throughout Spain, many paella variations appeared throughout different regions of Spain. Today, many types of paella are eaten throughout the world.
Curry saimin from Shige’s saimin stand.